Sexual harassment of women and girls is so ingrained in our culture that it is often hidden in plain sight despite it being the most common form of violence against women and girls. Public Sexual Harassment (PSH) comprises unwelcomed and unwanted sexual attention and intimidating behaviour that occurs in public spaces, both in person and online. PSH is so widespread within our society that the majority of women and girls in the UK will be subjected to it at some point within their lifetime and it will often begin during their childhood. 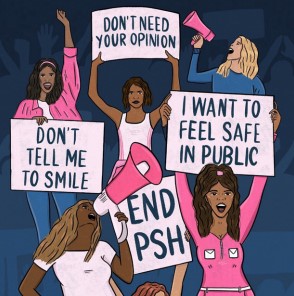 A recent survey found that 71% of women of all ages in the UK have experienced some form of sexual harassment in a public space. Women spend vast amounts of energy trying to avoid and negotiate intrusions like catcalling, following, flashing and groping. Women often have to spend more time and more money to be safe. Taking taxis or public transport is becoming increasingly more difficult, with London transport being labelled as an  ‘ultimate hotbed of sexual harassment. Despite the prevalence of this form of violence, victims and survivors of sexual harassment are often told that they are being 'unreasonable’ or 'too sensitive', or that they ‘can’t take a joke’. We consider this to be gaslighting victims who are left feeling unsafe in public spaces, silenced and ignored.

Incidents of PSH make women feel vulnerable and in danger. The figures:

The UK government’s view is that behaviour amounting to PSH is already covered by existing criminal offences. These include the Criminal Justice Act 1988, the Public Order Act 1986, the Protection from Harassment Act 1997 and the Sexual Offences Act 2003 et cetera. However, some girls and women who have taken the bold step of reporting PSH to the police have been turned away. In some instances, the police have reportedly told them that sexual harassment is not a crime, whilst others have felt the abuse has been minimised and demeaned.

If the UK government made PSH a specific criminal offence, it would be in line with a growing number of countries. For example, in 2014, Peru made street sexual harassment a crime and Belgium made it a criminal offence to sexually harass or intimidate a person in public based on gender. In 2018, France introduced a law against PSH and permits officers to charge fines on the spot. In the first year of the legislation being introduced, almost 450 fines were issued for degrading comments and unwanted sexual attention. This legislation was widely hailed by women and politicians as a positive step in taking sexual harassment seriously.

Right to Equality are working in collaboration with Our Streets now and Plan UK to campaign for public sexual harassment to become a specific criminal offence. Women and girls’ day-to-day lives are affected by PSH and the government has a duty to ensure they are safe in public places. In 2020 the global children’s charity Plan International UK and youth-led campaign Our Streets Now launched the #CrimeNotCompliment campaign to tackle public sexual harassment. Our crucial campaign call is to close the lacuna in the law, to ensure all girls – and indeed anyone who experiences sexual harassment in public – are protected, and to send a clear message to the public that this behaviour is socially unacceptable.

We have drafted a Bill which would give effect to the practical legislative changes urgently needed to address this issue and which is in line with recognised international human rights and safeguarding standards, including the Istanbul Convention, which the Government has recently ratified. Right to Equality and our collaborators firmly believe that the law can advance the rights of women and girls in society and thus it is imperative that legislation reflects the lived realities of women and girl’s lives. Criminalising public sexual harassment would have an immediate safeguarding and forensic effect and also send a strong symbolic message that sexual harassment will not be tolerated.

Unless you have experienced this pernicious and degrading form of public sexual harassment, you might not understand its long-term impact.  But for those that have suffered the harm and continue to, it is an enduring and serious blight on their lives. Girls deserve better.  They deserve to walk home without fear of their safety and attend school without being objectified and humiliated. Such abuse only serves to reinforce women and girl’s subservient status in society.  We must challenge such outdated notions - and enlist the law to achieve this vital social ambition.